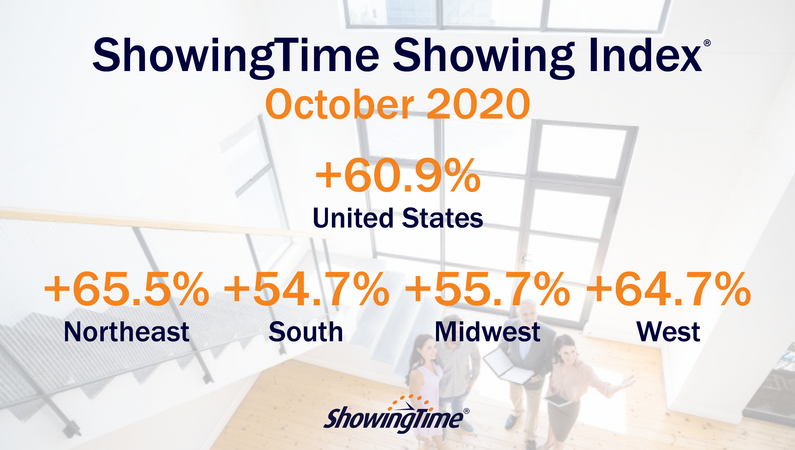 The ShowingTime Showing Index® found that October’s normal seasonal slowdown was upended, with year-over-year showing activity continuing to surge across the U.S. More than 25 markets, especially in the West, Northeast and the South, were indicative of these showing trends.

“Buyers looking for homes typically slow down searching at this time of year, but surprisingly, house hunting remained steady month-after-month as we head into winter, subverting all the usual trends,” said ShowingTime President Michael Lane. “Seeing markets throughout the country record twice as many showings per listing compared to the same time last year suggests pent-up demand hasn’t fully played out yet.”

Several markets in the West including Denver-Aurora, Colorado Springs, Reno-Sparks and Provo-Orem, recorded double-digit showings per listing, well above the current U.S. average of six showings per listing according to data from the ShowingTime Showing Index. A lack of inventory continued to be a contributing factor as more buyers competed for fewer listings, with traffic up 60.9 percent year over year.

“Another unlikely pattern we spotted was showing activity increasing from September to October,” added Lane. “Pensacola and Naples, Fla., along with Huntsville, Ala., and Gainesville, Ga. were examples where more buyers visited homes in October compared to the previous month.”

The Northeast Region again stood out in October, recording a year-over-year increase in buyer traffic of 65.5 percent, marking the fifth consecutive month the region recorded the largest gain in showing activity. Boston-Cambridge-Quincy and Bridgeport-Stamford-Norwalk are among the locations driving these trends. The West increased 64.7 percent over the prior year, while the Midwest was up 55.7 percent and the South recorded a 54.7 percent increase in showings vs. October 2019. 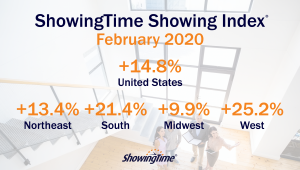 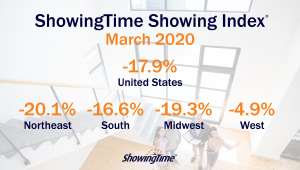 March 2020 Showing Index Results: Signs of a Rebound Occurring in Most States 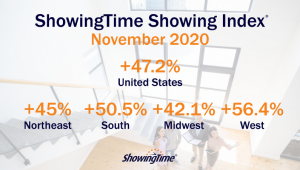