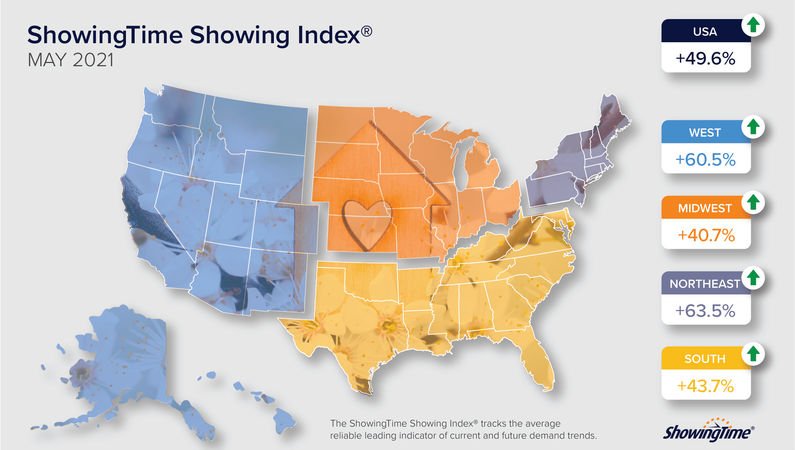 June 22, 2021 – Although May buyer traffic declined compared to April, it remains elevated from the same time last year, according to the ShowingTime Showing Index®.

Of the 30 busiest markets for showings across the U.S., 28 recorded month-over-month declines from April. The exceptions were Orlando, Fla., and Raleigh, N.C., which were unchanged. Jackson, Tenn., bucked the trend, recording an 11 percent increase in the average number of showings per listing.

“It’s common for showing traffic to reach a high point in April and remain there for a couple of months,” said ShowingTime President Michael Lane. “The unusual May decline doesn’t take away from the fact that showings continue to be at an all-time high, with year-over-year traffic up nearly 65 percent in some regions of the country.”

Showings increased 49.6 percent year-over-year in the U.S., with the Northeast region leading the way with a 63.5 percent increase compared to last May. It was followed closely by the West’s increase of 60.5 percent, while the South increased 43.7 percent and the Midwest was up 40.7 percent year over year.

“Although showing traffic continues at a historic pace, we saw a substantial month-to-month decrease from April’s levels,” said ShowingTime Chief Analytics Officer Daniil Cherkasskiy. “As we stated last month, even if demand begins to weaken, we’ll still be far from a buyer’s market since the demand for real estate remains at an unprecedented level.”

May marks the one-year point in which showing activity resumed in earnest after pandemic-induced drops. The infusion of additional inventory should come as a relief to buyers.