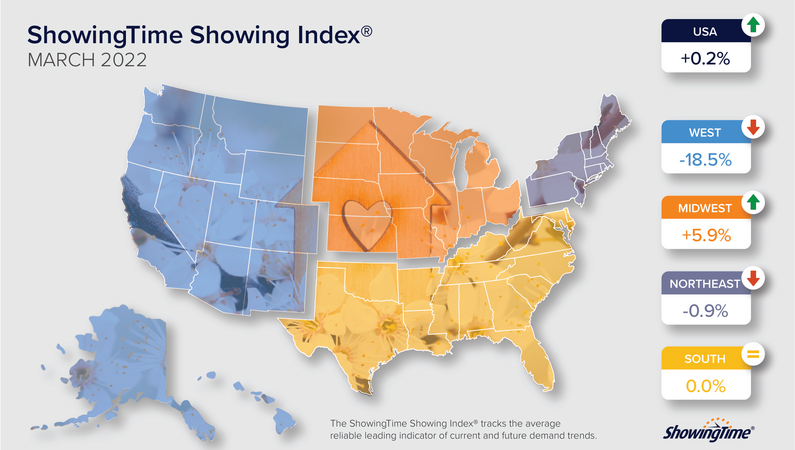 Apr. 28, 2022 – The number of markets seeing double-digit showings per listing jumped 46% in the past two months as buyer demand continues to outpace slightly rising inventory, according to the latest data from ShowingTime, one of the residential real estate industry’s leading technology providers of showing management and market stats. That’s despite March seeing a slight slowdown in showing traffic nationwide compared to last year’s unprecedented numbers.

March’s showing activity stands in contrast to March 2021’s torrid pace, in which each of the four regions in the U.S. saw year-over-year growth in foot traffic of at least 40%. The 25 busiest individual markets averaged more than 16 showings per listing, including Burlington, Vt.; Bridgeport, Conn.; Fort Collins, Colo.; and Bloomington-Normal, Ill. The growth in the number of markets with double-digit showings jumped from 83 in January to 109 in February and 121 markets in March of this year.

“We are sensing a slight slowdown in the Western region of the U.S. in year-over-year Showing Index values, although there is still very strong activity,” said ShowingTime Vice President and General Manager Michael Lane. “The demand per listing is still at historically unprecedented levels, but for the first time in the last 12 months it is neutral.”

By region, the Midwest’s 5.9% year-over-year increase in showings per listing led the country, while demand in the South was flat compared to March 2021. The Northeast dropped slightly by 0.9%, with the West’s 18.5% year-over-year dip in traffic marking the third consecutive month the region has recorded a decline, attributable in large part to its heavy activity in March 2021.