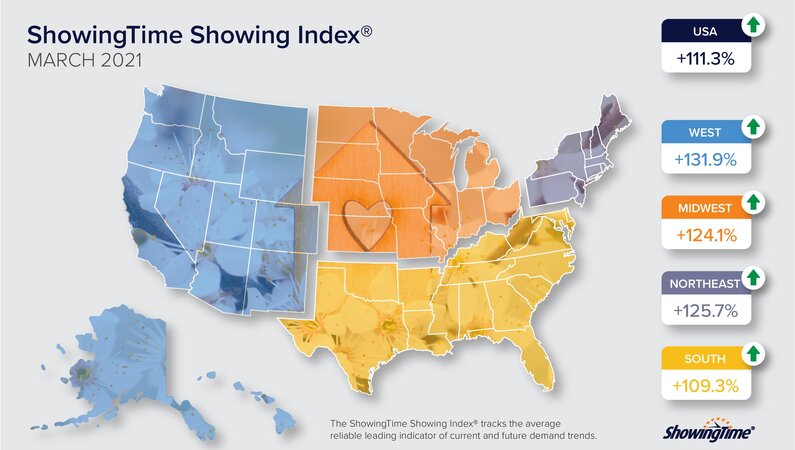 April 21, 2021 – Buyers continued their frenzied pace in March despite limited inventory, with 129 markets recording double-digit showings per listing compared to the previous high of 82 markets in February, according to data from the ShowingTime Showing Index.

For the second month in a row, the Denver and Seattle market areas led the way with an unprecedented 25 showings per listing, which matched their traffic numbers from February. By comparison, showings per listing averaged just under nine in markets across the U.S. where ShowingTime products are used. Other markets recording big month-over-month gains included Kalamazoo, Mich., up 62 percent from February, Lawrence, Kan., up 55 percent, and Elkhart, Ind., up 45 percent.

“Despite double-digit price appreciation and declining inventory, the number of showings per listing has risen dramatically in many areas,” said ShowingTime President Michael Lane. “The nation saw two months of substantial declines in buyer traffic last year when the pandemic hit. We’ve now seen 10 consecutive months of year-over-year increases in showing activity. With more listings usually coming on the market in the spring, buyers should have a bigger pool to choose from and more opportunities to compete for listings.”

Comparing showing traffic to a year ago results in bloated numbers, since the pandemic eliminated or greatly reduced most in-person showings; the West was up 131.9 percent year over year, the Northeast and Midwest increased 125.7 percent and 124.1 percent, respectively, while the South was up 109.3 percent year over year. Nationwide, showing traffic was up 111.3 percent.

“We’ve entered into territory that’s beyond the norm of cyclical real estate market variation between buyer and seller markets,” said ShowingTime Chief Analytics Officer Daniil Cherkasskiy. “The extent to which buyer demand has remained inelastic this year continues to amaze us. The situation also underscores how essential real estate is, as well as how large the share of buyers is,” he added.