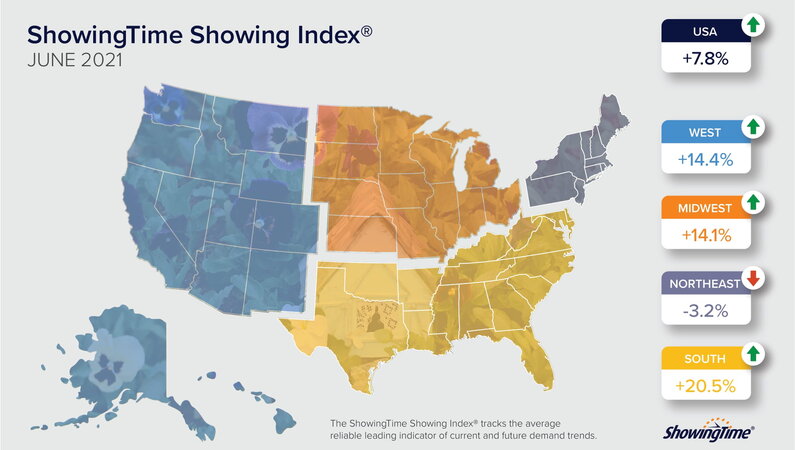 July 20, 2021 – Showing activity slowed during June compared to prior months, but remained hyperactive during the first few days listings go on the market in cities across the country, according to the ShowingTime Showing Index®.

“Buyer demand remains healthy,” said ShowingTime President Michael Lane. “Showing traffic is still above last year’s levels – other than in the Northeast, where it is down 3 percent from last year – though we saw a quick month-to-month drop in the number of showings per listing in June, showing an uncharacteristically rapid slowdown in real estate demand coming into the summer. This is likely to cause an increase in inventory levels in the coming months and ease the upward pressure on real estate prices that has pushed them to historic highs over the last 12 months.”

Though the volume of showings declined from prior months, the first five days listings are active remain critical for buyers, when showing calendars tend to fill up quickly. Listings in Riverside and Bakersfield, Calif., Buffalo and Rochester, N.Y., Los Angeles, Raleigh, N.C., and Grand Rapids, Mich., each averaged more than 30 showings just in the first five days.

Buyer demand remained strong enough in June to drive year-over-year jumps in showing traffic in the South (20.5 percent), the West (14.4 percent) and the Midwest (14.1 percent), leading to a 7.8 percent jump year over year in activity throughout the U.S. overall. The Northeast Region, however, saw a drop of 3.2 percent, the first drop in showing activity in any region since April 2020 when real estate continued to grapple with the effects of the pandemic.