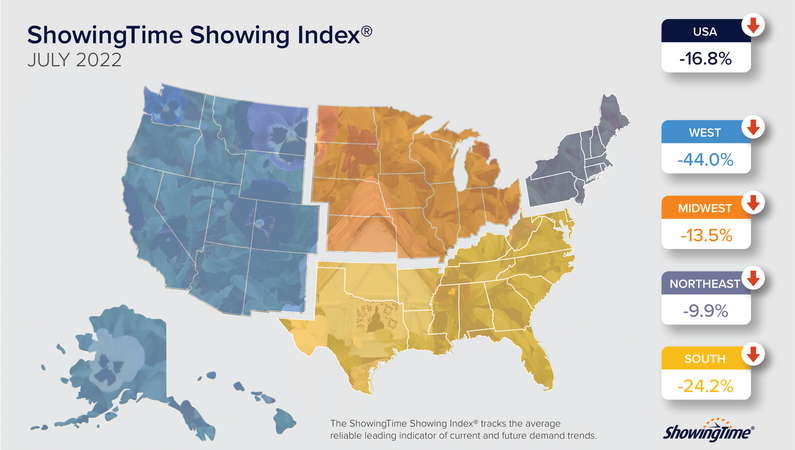 August 31, 2022 – Home showing traffic softened throughout the U.S. in July as the real estate market continues to normalize after last year’s record surge, according to the latest data from the ShowingTime Showing Index®[1].

The year-over-year dip in buyer activity follows a general market rebalancing that’s taking place across the country as available inventory increases while fewer buyers actively shop for homes. Both factors have eased competition compared to last summer’s multiple-offer environment. The Northeast again saw the smallest dip in buyer demand in July, recording a 9.9% drop, followed by the Midwest’s 13.5% decrease. The South’s 24.2% drop came next, with the West again claiming the largest year-over-year decline at 44%. The U.S. overall saw a 16.8% dip in showing traffic in July.

Burlington, Vt. again led all markets in showings per listing with an average of 12.1, marking the third consecutive month it claimed the top spot. Burlington was one of only four markets in the top 25 to see a year-over-year increase in the number of showings per listing, with Hartford, Conn., Appleton, Wis., and Syracuse, N.Y., also seeing modest increases.

Trenton, N.J., recorded an unusual month-over-month increase of 4%, the only market in the top 25 with a gain in traffic compared to June. Among the top 50 busiest markets, just two other cities, El Paso, Texas, and Bremerton, Wash., recorded month-over-month gains, 2% and 4%, respectively.

“The slowdown in showings tracks with the overall market rebalancing that’s taking place across the country,” said ShowingTime Vice President and General Manager Michael Lane. “Conditions for buyers are less competitive than they were last year at this time, while a general increase in available inventory in most markets has not only given buyers more options to consider, but more time to consider them.”

[1] The ShowingTime Showing Index is compiled using data from more than six million property showings scheduled across the country each month on listings using ShowingTime products and services. It tracks the average number of appointments received on active listings during the month, then reports the numbers by region and nationally.

[2] Calculated using the average number of buyer showings per active listing on a monthly basis. July 2022.