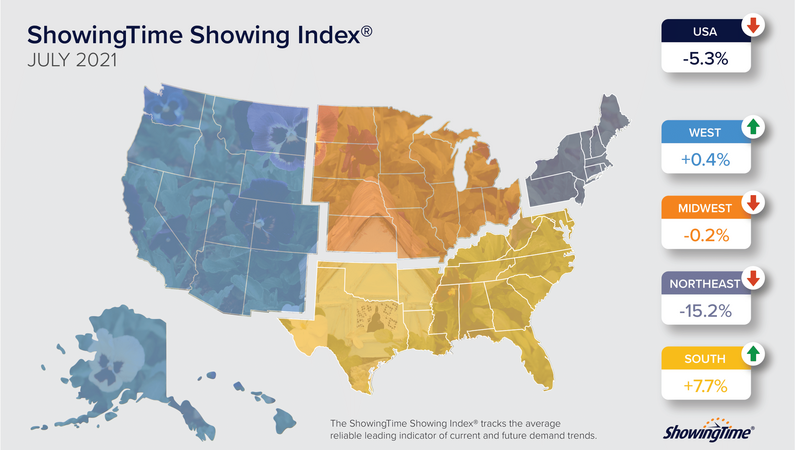 August 20, 2021 – Showing activity slowed during July compared to prior months, but still remained at historic levels with 110 markets averaging more than 20 showings per listing during the first five days, per data from the ShowingTime Showing Index®,

“In general, there are definite signs of cooling demand,” said ShowingTime President Michael Lane. “However, buyer traffic is still at historically high levels compared to pre-pandemic showings.” Of the top 30 markets tracked by ShowingTime, only Lakeland, Fla., recorded a month-over-month increase in showings per listing. The slowdown is consistent with the normal seasonality of residential real estate.

The South’s modest jump of 7.7 percent year-over-year growth in buyer demand put the region at the top of the country in July, followed by the West’s meager 0.4 percent uptick. The U.S. overall saw a 5.3 percent drop in showing traffic, with the Northeast seeing a 15.2 percent dip and the Midwest realizing a drop of 0.2 percent.

“Although real estate demand continues to be in historic territory, for the first time this year the ShowingTime Showing Index posted a 5.3 percent year-over-year decline in July,” said ShowingTime Chief Analytics Officer Daniil Cherkasskiy. “The average number of showings per listing have been declining for four months now, at a faster rate than the typical slowdown in this part of the year. Showings per listing declined by 33% from March levels in 2021, while in a typical pre-pandemic year, July would be about 20 percent slower than March.”