January 2021 Showing Index Results: Showings-Per-Listing Up, Inventory Down as 2021 Starts on a High Note 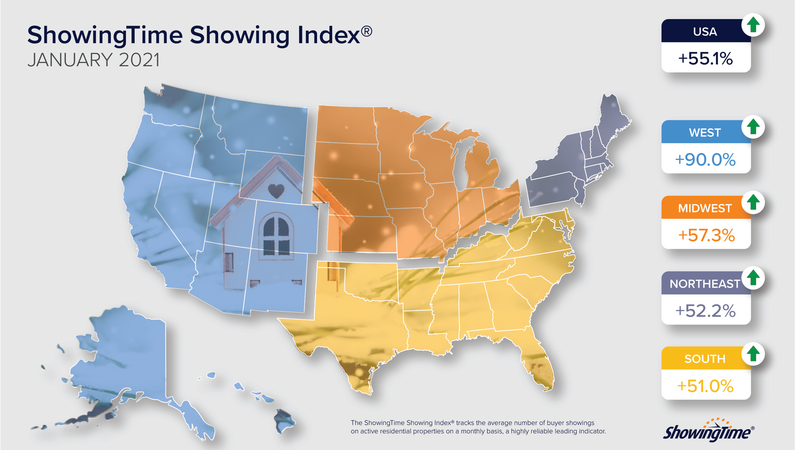 Home shoppers carried their end-of-year showing activity momentum into January, with home tours across the country up 55.1 percent year-over-year as more listings came on the market in some metro areas, according to the ShowingTime Showing Index®.

“It’s clear that buyers decided to come out in January instead of waiting until spring to shop for homes,” Lane said. “While the winter storms that affected most of the country in February will have a downward impact and will be reflected in our next report, we expect to continue seeing big jumps in buyer activity once cities thaw out and more listings come on the market.”

For the third consecutive month, the West Region experienced the most significant year-over-year increase in showing activity, with a jump of 90 percent. The other regions also recorded year-over-year increases, though at a slower pace than in December. The Midwest was up 57.3 percent, the Northeast 52.2 percent, and the South increased 51 percent.

“As anticipated, demand for real estate remains elevated and continues to be affected by low levels of inventory,” said ShowingTime Chief Analytics Officer Daniil Cherkasskiy. “On average, each home is getting 50 percent or more requests this year compared to January of last year. As we head into the busy season, it’s likely we’ll push into even more extreme territory until the supply starts catching up with demand.”