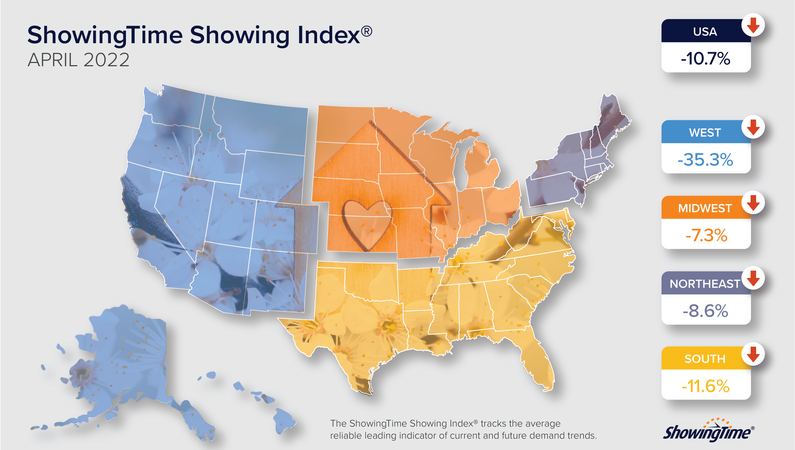 May 31, 2022 – Buyer competition for listings was slightly subdued in April as 103 markets across the country recorded double-digit showings per listing, compared to 146 in April 2021 and 121 in March of 2022, according to the latest data from ShowingTime.

Year-over-year declines occurred throughout most of the country, according to ShowingTime’s Showing Index®. A combination of tapering demand and comparisons to the hectic pace set last year partly explain April’s decrease, though the numbers still indicate robust buyer activity. The top 25 markets averaged more than 14 showings per listing, with Burlington, Vt., and Bloomington-Normal, Ill., leading all markets with 20.30 and 16.42 showings per listing, respectively. Other busy markets included Richmond, Va.; Denver; Akron, Ohio; Rochester, N.Y.; and Bridgeport, Conn.

“April buyer activity was rather unusual, since it typically matches March levels,” said ShowingTime Vice President and General Manager Michael Lane. “But this year, April traffic was slower across all markets, pointing to competition softening. It contrasts with last year’s dynamic, when demand reached a feverish peak in April.”

Regionally, the Midwest’s 7.3% year-over-year decline in buyer demand was the lowest, followed closely by the Northeast’s drop of 8.6%. The South saw an 11.6% decline in showing activity year-over-year, with the West’s 35.3% decline rounding out the regions.