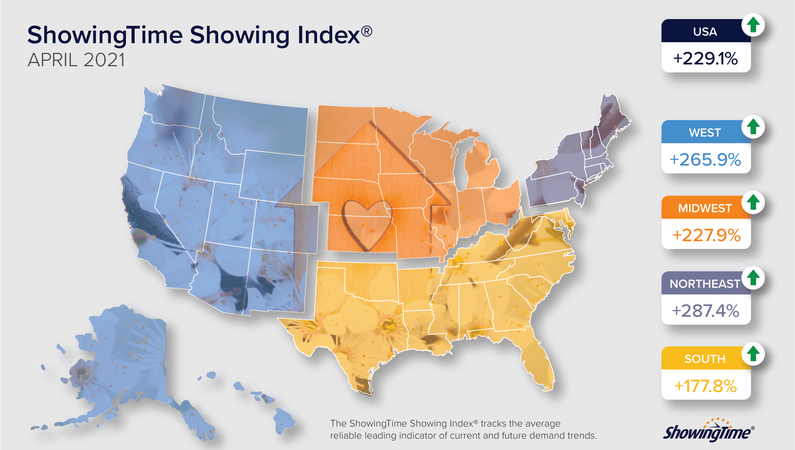 Denver’s excessive number of showings made it one of the two busiest markets in April, along with Seattle. In Denver’s case, it was the fifth consecutive month it ranked first or second among the list of cities and towns experiencing heightened competition for a limited number of homes. Up from last month’s record high of 129 markets with double-digit showings per listing, April’s new high-water mark coincides with the beginning of a spring market that traditionally sees more homes come on the market.

“Denver’s tight market is a microcosm of the conditions being experienced in many markets throughout the country,” said ShowingTime President Michael Lane. “With an average of only eight days on market in Denver, buyers are scrambling to see homes as quickly as possible before they’re gone. Real estate professionals are working overtime to meet this unprecedented demand and we’re hearing the same story from customers in many regions. Fortunately, we’re beginning to enter a season when we’re likely to see more new listings come on the market to better meet the demand.”

As in March, year-over-year gains in April’s showing traffic throughout the country were disproportionately inflated, reflecting the considerably diminished showing activity experienced in April 2020 as communities grappled with the pandemic. This trend began to reverse in May 2020 as real estate was recognized as an essential business in many localities, leading to a resumption in home showings that kicked off what has become an 11-month streak of year-over-year increases in showing activity throughout the country.

“For the first time in a long while, inventory in the markets we track has edged up slightly by three to five percent,” said ShowingTime Chief Analytics Officer Daniil Cherkasskiy. “Interestingly, the number of homes active at some point in April was the same as it was in March, suggesting that this decrease of inventory is not yet caused by the increase in supply, but rather by a decrease in demand. The next few months will show whether this a true turnaround point, or a temporary slowdown. Even if demand begins to weaken, however, we’ll still be far from a buyer’s market given that the demand for real estate remains at an unprecedented level.”

Nationally, traffic was up 229.1 percent compared to April 2020 when the pandemic halted or significantly reduced in-person showings. Activity was the highest in the Northeast with a 287.4 percent year-over-year increase. Traffic in the West region was up 265.9 percent followed by a 227.9 percent increase in the Midwest. The South followed with a 177.8 percent uptick to round out the month’s outsized gains.