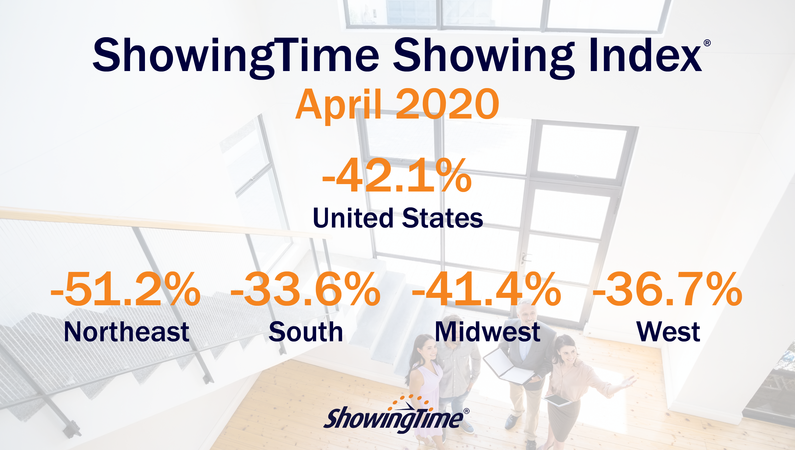 May 21, 2020 – Showing activity continued an impressive turnaround after an historic spring collapse, led in part by loosening restrictions and increased adoption of virtual showing technology, according to data from ShowingTime.

In early April, 42 states had issued stay-at-home orders, though by mid-May, the number of states where only essential businesses were permitted to remain open had dropped to 21. The Department of Homeland Security lists real estate as an essential service, though local guidelines take precedence.

“The beginning of April marked the absolute bottom of per capita real estate activity since the Great Depression as three-quarters of buyer traffic evaporated, yet that was immediately followed by an unprecedented turnaround,” said ShowingTime Chief Analytics Officer Daniil Cherkasskiy. “We’ve seen a significant rebound in May as rapidly returning buyer traffic concentrates on the subdued levels of inventory.”

The data also show that listings that have gone under contract since the onset of the COVID-19 pandemic have required 40 percent fewer showings. “The probability of going under contract for listings coming on the market has been remarkably stable after the first week of April,” Cherkasskiy said. “This suggests that buyers who were still trying to see homes in April were, on average, more determined to complete the transaction.”

The upswing in showing activity correlates with an increasing rate of adoption of technology, with more and more agents conducting showings virtually. Since introducing a “virtual showing” option within its showing management products in early April, ShowingTime has seen tens of thousands of showings conducted exclusively online.

ShowingTime also introduced ShowingTime LIVE, an all-in-one showing and video platform that enables agents and their buyers to use ShowingTime’s mobile app for live, one-on-one interactive video showings. ShowingTime LIVE is currently available in select markets, and will be available throughout the U.S. and Canada in June.

“We’re continuing to see great resilience in the industry, which can be attributed to agents’ willingness to expand their view of how showings can be conducted,” said ShowingTime President Michael Lane. “The data we’re seeing indicate an impressive rate of adoption of virtual showings. With the introduction of ShowingTime LIVE, we’re able to help agents get buyers into properties in a safe manner.”

In Michigan, state officials updated their guidance on May 7 and declared real estate an essential business. As a result, the state’s showing activity jumped dramatically, recovering to a normal springtime run-rate in just eight days. It could signal how other states will fare following similar actions and loosening of restrictions.

Click on the image to view the latest showing data.