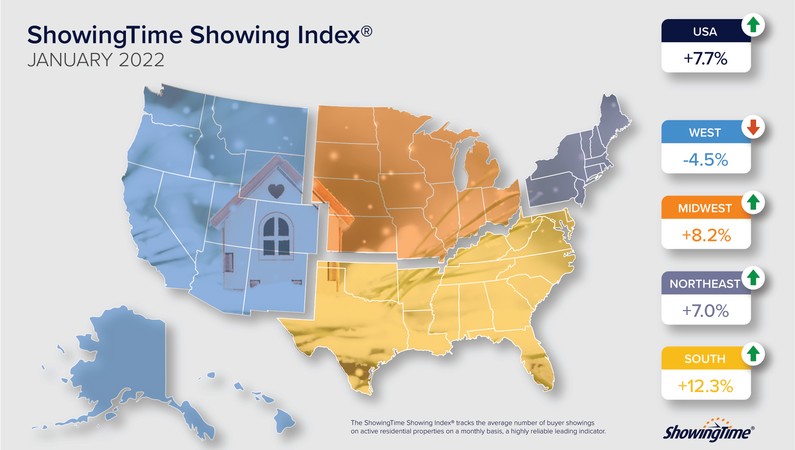 Feb. 28, 2022 – The latest data from ShowingTime, a residential real estate industry leading technology provider of  showing management and market stats, shows a surge in home buyer demand in January, with the average number of showings per listing at double digits in 83 markets nationwide. This enormous activity occurred in a month when buyer activity typically slows and followed a historic 2021, where buyer demand across the country was extraordinarily strong.

In January, the entire country experienced a 7.7% year-over-year uptick nationally in home tours, according to the latest data from the ShowingTime Showing Index®. The top 25 markets were up an average of 14% compared with the heavy traffic numbers recorded last January.

“Given last year’s historic flurry of activity, it’s not surprising that buyers were motivated to meet their home ownership goals so shortly after the holidays,” said ShowingTime Vice President and General Manager Michael Lane. “With buyer demand showing no sign of letting up, we remain committed to helping busy real estate professionals handle the ensuing surge in business, just as we did throughout last year.”

Regionally, the South led the country with a 12.3% year-over-year jump in showing traffic in January, with Dallas and the Florida cities of Orlando, Sarasota and Miami having enormous home touring action. The Midwest’s 8.2% climb and Northeast’s 7% bump in activity closely followed, while the West – despite very active traffic in Seattle and Denver – saw a 4.5% dip in showings compared to its historic January 2021 numbers.