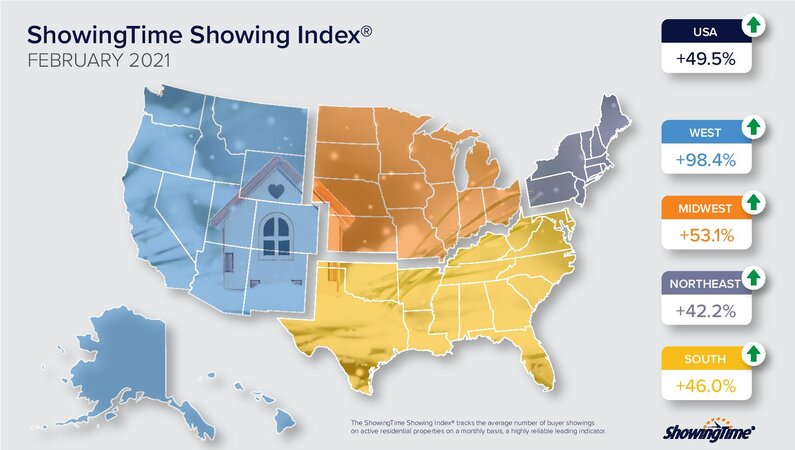 March 24, 2021 – Dwindling inventory was again met with an outpouring of buyer demand throughout the country in February as an unprecedented 75 markets reported double-digit growth, according to the ShowingTime Showing Index®.

“Seeing 75 markets experience that level of buyer traffic is remarkable, especially given that only four of the 75 had double-digit showings per listing one year ago,” said ShowingTime President Michael Lane. “Seattle, Denver and the areas surrounding those cities are seeing an unprecedented level of activity. It’s clear that lower inventory levels are keeping agents and their buyers extremely busy, contributing to a sense of urgency as we move into spring.”

Nationwide, buyer traffic jumped 49.5 percent, continuing a trend of national year-over-year growth in buyer demand that began in May 2020. Regionally, the West’s 98.4 percent gains were followed by the Midwest’s 53.1 percent uptick, a 46 percent increase in the South and an increase of 42.2 percent year over year in the Northeast.

“February continued the powerful trend we’ve seen in the last few months of more and more showings concentrated on dwindling inventory,” said ShowingTime Chief Analytics Officer Daniil Cherkasskiy. “In March and April, year-over-year comparisons will be less meaningful as the onset of COVID-19 in 2020 drove showing traffic down in those two months, but on a month-to-month basis we’re still likely to see further seasonal increases in demand, taking us further into this unprecedented direction. We expect that this will correlate with continued broad increases in prices.”

Other cities – including Alexandria, La., Little Rock, Ark., Jackson, Tenn. and Auburn, Ala. – saw month-over-month declines in showings, likely due to mid-February’s winter storm that caused more than four million in the south to lose electricity. The decline was short-lived, however, as ShowingTime’s daily showing activity charts revealed that buyer activity rebounded within days in most of the affected regions.